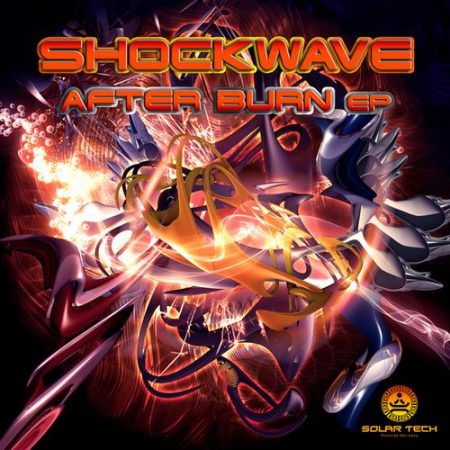 Solar Tech Records Germany
Shockwave’s highly anticipated debut EP, After Burn, has made a huge impact since being released. After a mere two weeks the EP has already firmly established itself in the Top 20 Psy trance releases on the Beatport charts. Mastered by the legendary sound designer and producer Matthew de Nobrega (Artifakt) at Timecode studios one can be assured of high quality production value.
Shockwave, consisting of Ronald de Stadler and Niel Kirsten, is one of Solar Tech Records’ most anticipated signings and the future is looking really bright for the Cape town based duo. Both members hailing from a strong musical background, they have been relentlessly crafting their own brand of Psychedelic trance since early 2002.
Shockwave is well-known for their high-energy approach having created a fresh sound with a true psychedelic presence over the last few years. They draw much of their inspiration from Israeli acts such as Xerox & Illumination, Basic and E-jekt, but still manages to produce an original sound with strong synthesis and melodic drive.
Even though Shockwave has only been part of the competitive South African scene for the last three seasons they have proved to be one of the most entertaining and dynamic acts to date. Their unique brand of Full-On Psychedelic trance is a guaranteed crowd pleaser for any party.
To date they have performed alongside well-known and respected artists such as Waio (Solar Tech) Madd Maxx and Burn in Noise at some of the top festivals in and around Southern Africa. They will also be holding the South African name high during the summer of 2013 when they will be touring Europe as part of the annual Solar Tech Records outdoor event, Psychedelic Experience Festival.
Shockwave fans can look forward to a number of remixes and collaborations with artists such as The Commercial Hippies, E-jekt, Corona and many others. They will also be releasing many more backbreaking hits on various compilations in the near future.